Bouncing in a boat on the sea alongside a pod of playful beluga whales is a boisterous, musical experience to enjoy!

The beluga or white whale (delphinapterus leucas) is an arctic species of marine mammal closely related to the narwhal. It is sometimes called the sea canary due to its high-pitched squeaks, squeals, clucks and whistles. Residing in both arctic and sub-arctic waters, pods of belugas often congregate near the mouths of rivers. They can sometimes be seen from the land, but the most enjoyable way to watch beluga whales in Nunavut is with a locally guided boat tour. Belugas are common to Nunavut communities along the western coast of Hudson Bay such as Arviat, Chesterfield Inlet, Rankin Inlet and Whale Cove, also near Foxe Basin, including the communities of Cape Dorset, Hall Beach and Igloolik, plus along the eastern shores of Baffin Island, from Qikiqtarjuaq and Clyde River as far north as Pond Inlet. 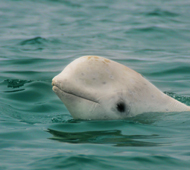 Watching these gentle giants of the north majestically gliding through Nunavut waters has always been a great solace and cultural inspiration to the Inuit!

The bowhead whale (balaena mysticetus), which is also known as the Greenland right whale, or arctic whale, is a massive, dark-coloured baleen whale. This leviathan can grow to 20 metres (66 ft.) in length and weigh up to 136 tonnes (300,000 lb.) — second only to the blue whale in body mass. Living year-round in Nunavut waters, two populations of bowhead estimated to total 1,000 whales reside in the Hudson Bay/Foxe Basin region and along the east coast of Baffin Island. Bowhead watching takes place from Nunavut communities such as Cape Dorset, Clyde River, Hall Beach, Igloolik, Kugaaruk, Pangnirtung, Pond Inlet, Qikiqtarjuaq and Repulse Bay. The bowhead is one of the longest-living mammals in the world (150-200 years) and it possesses the largest mouth of any animal. 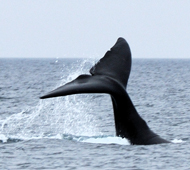 Few sights are more spectacular than witnessing a massive herd of these migrating beasts thundering over the tundra!

The most important land mammal to the Inuit is the caribou (rangifer tarandus) — ‘tuktu’ in Inuktitut — which has been hunted for food, clothing, shelter and tools by humans ever since the Stone Age. When Europeans arrived in North America and encountered these animals, they recognized them as reindeer — but bigger! More than 750,000 caribou live in Nunavut and the ancient migration patterns of the various herds (Bathurst, Beverly, Peary and Qamanirjuaq) are well known to Inuit hunters and guides. Communities such as Baker Lake, Cambridge Bay, Chesterfield Inlet, Kimmirut, Kugaaruk, Repulse Bay and Resolute can provide reliable caribou excursions.

A lucky encounter with these shaggy, bearded creatures may make you feel that you've been transported back in time!

Muskoxen (ovibos moschatus) are magnificent animals from the Pleistocene Ice Age. Noted for their long curved horns, thick coat and the musky odour of the males in their mid-August rut, they are more closely related to sheep and goats than to oxen. Their ancestors migrated into Nunavut about 150,000 years ago, alongside the now-extinct mammoth. Approximately 60,000 muskoxen, usually living in herds of 10-20 animals, can be found thriving in several parts of Nunavut. Communities such as Cambridge Bay, Gjoa Haven and Grise Fiord all have nearby resident muskox populations. Local guides know their migration patterns throughout the year and can arrange encounters with these herds. The wool of the muskox — called ‘qiviut’ in Inuktitut — is highly prized for its softness, length and insulating quality. 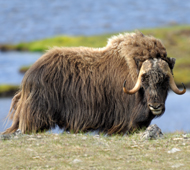 It is a magical event to witness the mysterious unicorns of the sea crossing their tusks into the air like swords!

The most unique whale inhabiting Nunavut waters is the narwhal (monodon monoceros) which lives year-round in the Arctic. Narwhal males are distinguished by a long, straight, helical tusk — a modified incisor tooth — extending up to three metres (10 ft.) in length from their upper left jaw. The exact purpose of this ‘unicorn’ tusk remains a scientific mystery. In winter, narwhals feed mostly on squid and flatfish at depths of up to 1,500 metres (4,921 ft.) under dense pack ice. In summer, they move closer to shore, which is better for viewing them. Usually travelling in pods of four to 20 animals, the narwhal is deemed vulnerable to climate change due to its specialized diet and narrow geographical range between Canada and Greenland. Narwhals can be enjoyed near the Nunavut communities of Arctic Bay, Pond Inlet and Resolute. 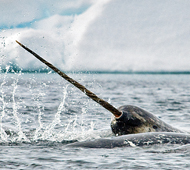 To safely watch a gigantic snow-white polar bear wandering across the barrens, prowling for seals on the windswept pack ice, or gracefully swimming ahead of her cubs in frigid arctic waves is an unforgettable, supreme lifetime experience!

The polar bear (ursus maritimus) is the world’s largest carnivore species found on land, as big as the omnivorous kodiak, but more powerful. ‘Nanuq’ (the Inuktitut word for polar bear) is an extremely dangerous, very patient and highly intelligent predator. An adult male polar bear can grow to three metres (10 ft.) in height when standing up and reach 720 kilograms (1,590 lb.) in body weight. Polar bears are excellent swimmers in the frigid Nunavut waters, travelling great distances across the sea ice to hunt seals along the floe edge. They are attracted to any potential food source, including bird nesting sites such as Akpatok Island, but also to the smells of campers cooking meals in remote locations. To safely see polar bears in Nunavut, from expert communities such as Arviat, Grise Fiord, Hall Beach, Pond Inlet, Qikiqtarjuaqand Repulse Bay, trust only an experienced guide or outfitter and use powerful binoculars and telephoto camera lenses. 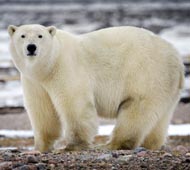 Touring Nunavut in the spring when the sea ice breaks up you may be delighted by the curious expressions of seals popping their heads up out of the icy water to check you out!

The smallest, most abundant and most important marine mammal for both polar bears and the Inuit is the ringed seal (pusa hispida) that thrives year-round in arctic waters. It has distinctive dark spots on its coat surrounded by light grey rings, with a small, earless head and short cat-like snout. An adult ringed seal usually grows to 150 centimetres (5 feet) in length and 60 kilograms (132 lb.) in weight. They prefer to rest on large ice floes, breeding and raising their pups on the pack ice, migrating further north for denser ice, ranging as far as the North Pole. Yet, in the springtime, as the sea ice begins to break up, they can be spotted near every single community in Nunavut. They are the primary food source for ‘nanuq’ (polar bears). Human beings have also hunted them for food, plus clothing and tools, since 2500 BC. The current population of ringed seals is estimated to be around two million. Inuit subsistence hunters today harvest fewer than 30,000 ringed seals each year to help feed their families. 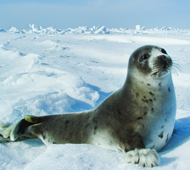 Witnessing these relaxed but sometimes irritable, graceful yet often clumsy behemoths basking in the sunshine and occasionally poking each other over the best sun tanning places is enormously enjoyable fun!

The walrus (odobenus rosmarus) is a large flippered marine mammal recognized by its prominent tusks of ivory, whiskers and great bulk. An adult bull walrus can reach four metres (13 ft.) in length and 2,000 kilograms (4,400 lb.) in weight. Walrus tusks — which are elongated canine teeth used for poking holes in the sea ice, for hauling themselves onto the frozen surface and for the violent dominance battles between rival bulls — can reach a length of one metre (3 ft. 3 in.) each. Walruses spend a significant proportion of their life (up to 35 years) on the sea ice in pursuit of their preferred diet of bivalve mollusks. They will dive hundreds of metres deep to the sea bottom to retrieve their favourite food and they can eat up to 4,000 clams in one feeding. Boat tours to see herds of walruses gathered on ice floes can be arranged in Nunavut communities such as Arviat, Coral Harbour, Grise Fiord, Hall Beach, Igloolik, Kimmirut, Kugaaruk, Pond Inlet, Repulse Bay and Sanikiluaq. A tasty Inuit dish is aged walrus meat — ‘igunaq’ in Inuktitut — a treat which elders say tastes like cheese. 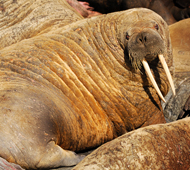