Nunavut is a land of many wonders and some of the coolest places. Here are 5 cool and usual places to visit in Nunavut.

Located on Ellesmere Island near the 80th parallel, Eureka is a small research base, claimed to be the coldest inhabited place in Canada with temperatures averaging at -19.7 degrees celsius. Despite its frigid winter temperature, the Fosheim Peninsula, where Eureka lies, has been described as “The Garden Spot of the Arctic” due to the abundant flora and fauna, more so than anywhere else in the High Arctic.

Road to Nowhere is a 3.5 km road in Iqaluit that winds along the tundra, branching off the main road to Apex. Previously, the road ended nowhere, like its namesake suggested. Today, the road ends at a shooting range.

Alert is another Canadian Armed Forces facility at the tip of Ellesmere Island, 600 miles from the North Pole, and lies closer to Moscow than to Canada’s capital city of Ottawa. The outpost is tasked with intercepting radio signals and typically has 100 people stationed there year round. From Armed Forces to civilian contractors or Environment Canada employees. There’s even someone whose job it is to keep watch for polar bears away from the base. Alerta and Eureka aren’t typical ‘tourist’ destinations; typically daring hikers and skiers charter flights to visit these communities. 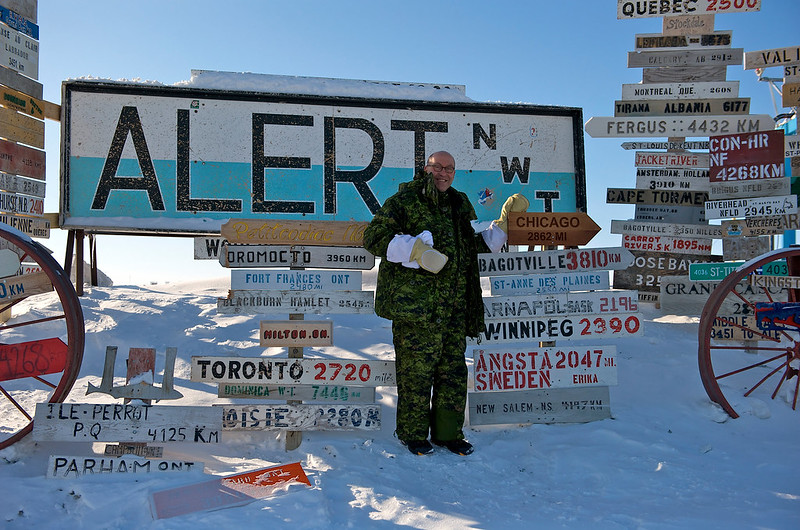 Igloolik is a vibrant artistic community in the Qikiqtaaluk region. Igloolik is home to the only Inuit circus, Artcirq, which blends Inuit culture and modern circus techniques. In 2010, members of Artcirq performed in Vancouver, Canada as part of the 2010 Winter Olympic Games. Igloolik is also home to the bowhead whale skull sculpture on the shores of Ham Bay.

Grise Fiord, also known as ‘Aujuittuq’ in Inuktitut, is the northernmost community in Canada. You guessed it on Ellesmere island. In 1899, Norwegian explorer Otto Sverdrup called it Grise Fiord, Norwegian for ‘pig fiord’ after the loud sounds made by walrus herds.  However, it’s Inuktitut name is more appropriate, meaning ‘place that never thaws’ even with 24 hours of sun from April through August, it never completely thaws. Unlike Alert and Eureka, Grise Fiord is the most accessible community on Ellesmere Island.