The rising moon glittered on the frozen snow and the massive bulk of Mt. Asgard silhouetted against the darkening sky. I paused for a moment in the frigid air, appreciating the arctic beauty. As I headed to my tent I could hear the ripple of women’s laughter from Katja’s cooking shelter. It had been a hard, cold ski from our last camp… up and over the divide from the Owl River and then a trudge across Glacier Lake into a wicked headwind to this spot in a sheltered nook. What on earth were those ladies laughing about? I soon realized that the warmth of our tiny MSR cookstoves in the cozy cocoon of the shelter allowed the hardships of the past few days to subside.

We were a group of 18 women, thirteen from Lease Plan UK, an international corporation involved with automobile leasing, one photographer, one Parks Canada staff and three Black Feather guides. The expedition was Arctic Challenge, a twelve day, 100 km all-women ski touring expedition across Baffin Island’s Auyuittuq National Park. The expedition was designed to foster gender equality within the company and to encourage women to challenge themselves to reach for goals and dig deep to succeed. The 14 women were selected in September, 2014 from over 100 company employees who applied.  Since then, they trained for the expedition; learning to cross country ski, to set up tents and light backpacking stoves in cold conditions and doing mental and physical training to prepare.

Lease Plan contracted with Black Feather Adventures, a Nunavut licenced wilderness tourism business, to provide equipment, food, logistics and 3 female guides. Black Feather has a long history of outfitting in Canada’s north and was a logical choice due to its exemplary reputation in the Arctic. There was much preparation… food and equipment packaged and freighted north, group members flew from London to Ottawa to Iqaluit, and finally on April 9, the group met in Qiqitarjuaq. After a final equipment check, the trek was starting!

The first few days saw frigid temperatures and howling winds, with highs -20 C and winds up to 80 km per hour. One member twisted an ankle on day 1 and we had to turn back to our first camp. We contacted a local Inuit with snowmachine, who evacuated the injured woman to Qiqitarjuaq’s Nursing Station.  This initially dampened the team’s enthusiasm. Despite this we forged on, slowly skiing up the Owl River. Each night, 2 person Hilleberg arctic tents were set and our cooking shelters erected. The group divided into 3 cooking groups. Our shelters provided a haven from the blustery wind as hot soup and a good meal was enjoyed.  After dinner, as the light faded from the sky, we headed to our tiny tents to snuggle into our arctic sleeping bags and draw the hoods up to our noses.

It was tough to get moving in the chilly mornings.  The condensation from our breathing froze as ice crystals on the outside of our sleeping bags and inside of the tent walls.  As we sat up to get ready, showers of ice crystals would rain down… a cold welcome to the day! After donning parkas, thick overpants, boots, mitts and hats we could step out into the crisp morning. A hot breakfast fueled us and loading our sleds, we set out. On some days we had snow pack on the ground, allowing us to ski. Other days, we followed the icy river, wind-blown of snow.

After a steep ascent up a glacial moraine, we reached Glacier Lake, named because of the 3 glaciers feeding into it.  Frozen most of the year, it was totally ice covered, with sections of wind packed snow. Famous Mt. Asgard beckoned us from the other side and we aimed there for our next camp. As a beautiful bright day dawned the next morning, spirits of the group lifted — we were almost half the way there! Soon we were underway, heading past Mt. Asgard, Mt. Loki, the Highway, Turner and Norman Glaciers.  It took us all day to traverse Summit Lake to our campsite near the south end of Summit. From here, it would be downhill… down the frozen Weasel River.

One of the most memorable days was the initial descent of the Weasel. The river, with waterfalls, rapids and a good gradient, was totally frozen. Using our ice grippers, we descended this icy stream, our sleds skittering behind and sometimes in front of us! We were becoming very adept at maneuvering the sleds around rocks, rough ice patches and over small frozen waterfalls. A sense of adventure and excitement permeated the group. I could hear laughter and chatter from the various groups as they helped each other over challenging sections.

Lunch each day was a quick affair. We warmed up ingredients to make sandwiches in the morning, using our backpacking stoves. Once made, we would tuck the sandwich down the front of our shirts underneath our parkas, to keep them from freezing — anything left for any time would be frozen solid. We also had warm water or tea in our thermoses and chocolate or granola bars for snacks. We would need about 5,000 calories per day to fuel our body’s exercise and warmth. Despite eating copious quantities of high energy foods laced with butter, we all lost weight!

The Lease Plan group had a few special projects along the way. Each member’s family had, unbeknownst to them, written a letter of encouragement and enclosed a photo of their family, which was brought along. On day 7, we stopped in a protected nook and the letters were distributed to the surprised team. The outpouring of pride, support and love from their families and friends back in the UK gave them more inspiration to forge ahead. A few days later, we reached the Arctic Circle, the geographic line where at the winter solstice there is 24 hours of darkness. We arrived in full sunlight and took the opportunity for some great photos.

We could now smell the finish and sense that the expedition would be a success. We counted down the kilometres to ‘Overlord’, the terminus of Ashuyak Pass, where our Inuit snowmobile drivers would be waiting to take us the 30 km to Pangnirtung. By now, the well-oiled team could break camp and pack sleds efficiently and we were soon underway. Finally, we could see the stark outline of the Overlord emergency shelter… our goal! The last kilometre was done hand in hand, a team that had struggled with extreme cold, blustering winds, heavy sleds and difficult terrain. They had watched over each other for signs of frostbite and hypothermia, helped each other put up and take down frozen tents, given encouraging words when spirits were low and tears falling… and finished stronger and more appreciative of their place in the world.

As we made our final steps a sense of well-being and happiness permeated all of us: hugs, tears and smiles all around. Back in Pangnirtung, we checked into Auyuittuq Lodge and dominated the communal dining room with a hilarious recounting of hardships and accomplishments. The beaming faces still showed the tell-tale signs of the north… frost-nipped noses and cheeks, chapped lips and ‘raccoon eyes’ where goggles shielded the sun and wind.

Now back in the UK, Lease Plan is thrilled with the expedition’s outcome; the spirit and confidence that this project has developed in its employees. I know, however, that each member has been touched profoundly and will carry a part of Canada’s north with them in their hearts forever. 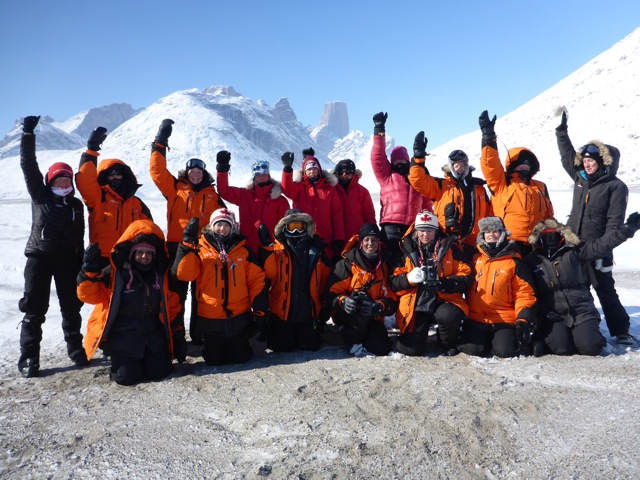