Surrounded by unspoiled nature in one of Nunavut’s national or territorial parks, sometimes you just have to stop and appreciate the astounding views. Like the logic-defying peaks along the Pang Pass in Auyuittuq National Park. Or the otherworldly hoodoo spires and massive Mothership glacier in Sirmilik National Park. Or the sun, that travels around in a small circle high above you all summer in Quttinirpaaq National Park, at the northern end of Ellesmere Island—just about as far north as you can get in the world while remaining on solid land.

Nunavut is blessed with many special places, which recognize areas that are important in Inuit history and culture, along with celebrating the unparalleled beauty that abounds in the territory.

No matter what your interests are, there’s a national or territorial park that will appeal to you. 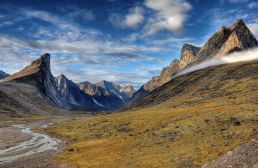 Here’s a park for…

It’s one of the most dramatic landmarks in all of the world: Mount Thor, a granite cliff with the planet’s greatest vertical drop of more than 1,200 metres. It’s just one of the many unbelievable sites you’ll witness on the Akshayuk (Pang) Pass, a challenging, multi-day hike through the park. Spend a night camping in the shadow of Mount Thor or Mount Asgard, a two-peaked mountain, and you might just have to pinch yourself to confirm that the view out of your tent is real and not a dream.

The Northwest Passage Tail in Gjoa Haven will put the mythology of that so-called ‘Arctic Grail’ into perspective, by revealing the historical significance of interactions between explorers and Inuit. The Northwest Passage Information Centre in Gjoa Haven provides an excellent overview of the trail and a link with the living keepers of the passage’s history. For a more comprehensive history, visit Gjoa Haven during the Umiyaqtutt Festival in late August, to commemorate the discovery of Sir John Franklin’s two doomed ships—the Erebus and Terror—nearby.

Keep an eye out for polar bears and caribou, grizzly bears and Arctic wolves in Ukkusiksalik National Park, a pristine tundra expanse that also includes Wager Bay—a giant inland sea where bowhead whales, orcas, belugas, walruses and even narwhal spend their summers. Make sure to bring your binoculars.

Qaummaarviit Territorial Park is rich with historical and archaeological treasures that tell a story of centuries of Inuit occupation. Just a short dogsled or boat ride from the hustle and bustle of Iqaluit, you will find tent rings and sod houses—the remains of dwellings used over the past 750 years. On the journey to the park, watch seals swimming in the ocean or basking on the sea ice.

Fossil Creek Trail represents a treasure trove of ancient history, with Nunavut’s largest concentration of known fossils—some of which date back more than 450 million years. Easily accessible from Coral Harbour, the trail is well-marked with informative signage, allowing you to travel back in time to when Southampton Island was at the bottom of a tropical sea near the equator. Walk the trail on your own or with an experienced local outfitter, who can keep a watch out for wildlife while you devote all of your attention to the fossils. 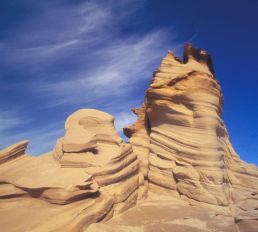 …your imagination to run wild

This is what you’ve always imagined the Arctic to be. Sirmilik National Park is a dreamscape of ice fields, glaciers and mountains, with geological oddities like spiral hoodoos and marvels like the Mothership glacier, which looks like a giant UFO. Book a tour with an outfitter in Arctic Bay or Pond Inlet, who can bring you out to the park’s attractions or to watch in wonder as narwhal congregates at the floe edge in spring.

Whalers set up shop on Kekerten Territorial Park in the 1850s and continued to overwinter there until the 1910s. Today, visitors can walk the wooden boardwalks built around this abandoned whaling station and examine the old equipment and facilities, while views of the harbour—surrounded by the natural beauty of Cumberland Sound’s fiords—is worth the trip alone. Visits to Kekerten can be made in either the spring or summer with outfitters from Pangnirtung.