The qulliq (Inuit stone lamp) is lit and its glow warms the room with a dancing flame not unlike the northern lights. Susan Avingaq begins to sing an ancient song about happy and prosperous times. It is chant-like, and the words move with the qulliq light and bring us closer to life on the Arctic land and sea. Susan grew up in a qammaq – a sod house – in a small camp near what is now Igloolik on the northwestern part of Baffin Island. The qulliq was the only source of heat and light and was fueled by seal and whale fat, it was – and still is – a symbol of survival and of home. Today she lights the qulliq to bring us back to the music, stories and values of Inuit culture. 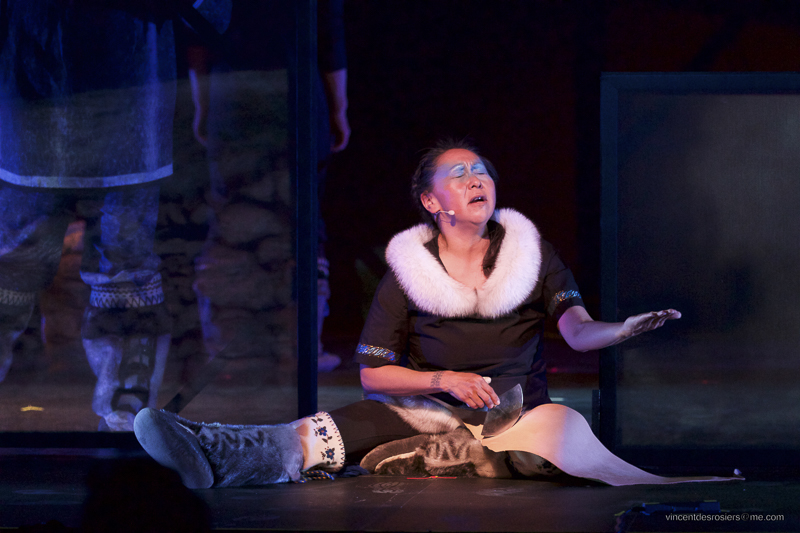 Susan is here at the Qaggiavuut office in Iqaluit to open a theatre workshop for Inuit performing artists from all regions of Nunavut. They will collaborate over a three-month period to create a new work of theatre based in traditional Inuit storytelling. Elders, like Susan will be our guides and provide the script and the cultural dramaturgy for Kiviuq Returns, about a hero who, lost and paddling in his qajaq, encounters many strange, humorous and frightening creatures and animals. His spirit guides and the teachings of his elders support him through his long, lifetime journey home, but it is his resilience, calm and courage that ensure he survives; he never gives up.

This summer Kiviuq Returns became the first Inuit language work of theatre to tour in professional southern Canadian stages as well as Nunavut communities. In 2017 the interdisciplinary production featuring Inuit legends, contemporary and traditional music, dance and digital design performed in 11 Nunavut communities, 4 Canadian cities, to a total audience of 15,000. In 2018-19 the show will tour in Greenland, be performed at the Tarragon Theatre in Toronto and is being developed for a tour of theatres in China!

This is only one of the projects taken on by Qaggiavuut, a non profit society dedicated to strengthening the Inuit performing arts. Formed in 2010 to advocate for the needs of Nunavut’s performing artists, Qaggiavuut is working to build Qaggiq – a Nunavut performing arts and cultural learning hub – a space to create, train, teach and present the performing arts in Nunavut. To highlight the need for a performing arts space, the cast of Kiviuq Returns was forced south to rehearse and stage their show at performing arts centres in Kingston, Banff and Ottawa before returning to Nunavut to perform. Without space, artists simply cannot create professional new work necessary to building a cultural destination for the Nunavut community and its visitors.

Winner of the Arctic Inspiration Prize in 2016, Qaggiavuut has developed partnerships with the federal and territorial governments, Inuit organizations and the private sector to map Nunavut’s musicians, actors, writers, filmmakers, acrobats and cultural performers on its website database, and deliver training workshops to them. In 2017 alone, Qaggiavuut supported 300 Nunavut performing artists and delivered performing arts workshops to over 5000 Nunavut youth.

The performing arts are a key element to tourism, linking visitors to the culture through music, dance and storytelling.  Qaggiavuut is working to ensure Nunavut’s performing artists are given opportunities to train and collaborate, so they can present quality performances that bring both old and new Inuit culture alive.  When artists are strong, so is the culture and the voice of its people.

The chorus of the old song repeats and the young actors join to the beat of Pakak Innuksuk’s drum. “Aja ja ja …” These performers are part of a revitalization of the traditional music and stories of the Inuit , once banned during colonization and now reclaimed by a new generation learning from elders. Susan Avingaq taps down the qulliq flame, keeping it steadily dancing and moving, like the culture she so well represents and shares.

For upcoming performances and workshops in Nunavut, please refer to the Qaggiavuut Facebook and website and contact us to learn how you can support Nunavut’s performing artists.