Arviat is a traditional Inuit hamlet located on the western coast of Hudson Bay, the southernmost mainland community of Nunavut.

Arviarmiut (‘people of Arviat’) are a mix of Caribou Inuit bands with inland and coastal traditions.

Arviat’s tundra lands, lakes, rivers and seawaters are rich in wildlife. Pods of beluga whales are often seen in the many small bays near the community.

Thundering herds of migrating caribou are found inland and polar bears migrate along the coast. The prized sculptures and carvings made by Arviat artists are unique amongst the Inuit, using an extremely tough local stone. The community has highly skilled seamstresses producing articles of sealskin clothing that are popular in all of Nunavut, but Arviat is perhaps most famous in the territory for its gifted musical artists, including Charlie Panigoniak and Susan Aglukark.

Arviatᐊᕐᕕᐊᑦ'Place of the bowhead whale'

The pleasant summer days of July and August have temperatures averaging between 15°C and 20°C.

The first snowfall usually occurs in October. January, February and March are the coldest winter months, when blizzards happen and the temperature can drop to -35°C. With winter wind chill it can feel like -50°C. Bright sunny days grow steadily longer and longer from April through June.

Arviat’s name is derived from the Inuktitut word ‘arviq’ meaning ‘bowhead whale’ because the nearby coastal landscape resembles the shape of this gigantic marine mammal.

Earlier in history, this location was known as ‘Tikirajualaaq’ meaning ‘a little long point’ and it was also called ‘Ittaliurvik’ meaning ‘a place where the people make tents.’ Thule ancestors of the Inuit lived here in 1000 AD.

The coast of Hudson Bay near Arviat was a traditional summer hunting location for a subgroup of the largest band of Caribou Inuit, the Paallirmiut (‘people of the willow’). Their ancient camping grounds, located eight kilometres (five miles) from present-day Arviat, were designated a National Historic Site in 1995.

When the Hudson Bay Company (HBC) set up a trading post here in 1921 they called it Eskimo Point.

The HBC post attracted Inuit to the area, as arctic fox were plentiful and trapping was a profitable trade.

Catholic and Anglican missions arrived in 1924 and 1926. Caribou migration patterns changed in the late 1920s, making them difficult to hunt. At the same time the market for furs collapsed, creating hardship for many groups of inland Inuit — especially the Paallirmiut, the Tahiuharmiut (a subgroup of Paallirmiut) and the Ihalmiut (also called Ahiarmiut). The Ihalmiut were the hardest hit. The churches provided relief and medical help.

The Royal Canadian Mounted Police established a permanent RCMP station here in 1937, which brought stability and governance. Famine and disease struck this region in the 1940s and persisted until the late 1950s when the Government of Canada resettled a group of Ihalmiut (‘people from beyond’) from Ennadai Lake to Eskimo Point. A federal day school was built in 1959, followed by a medical clinic in 1960, marking the beginning years of permanent settlement.

The English name of Eskimo Point was changed to Arviat on June 1, 1989.

Venturing out on the land on cross-country skis, by dog sled, snowmobile or ATV, is a great way to enjoy the natural serenity and breathtaking views of this place.

The spring and summer months are the best time to explore the vast landscape.

Fishing is very popular here; you can catch lake trout, grayling and arctic char. At various times of the year there are dog team races, snowmobile races, igloo building competitions and the Inuumariit Music Festival.

A pleasant summer excursion is a short boat ride from Arviat to the Arvia’juaq and Qikiqtaarjuk National Historic Site, the summer home of the ancient Paallirmiut people. Another notable landmark is the Whale’s Tail Monument where you can enjoy splendid views of Arviat and its surroundings.

There are arctic ground squirrels, arctic hares and arctic foxes to be found nearby. Farther inland there are lots of caribou. Along the coast and at the floe edge you can view herds of seals, pods of beluga whales and celebrations of polar bears. 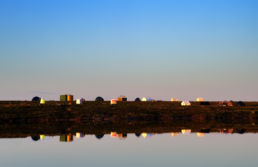 Arviat has strong musical roots and traditions. It is the home of renowned Inuit performers Charlie Panigoniak and Susan Aglukark. For ten days in October, Arviat hosts the Inuumariit Music Festival.

Inuumariit Music Festival
An annual event held at the Mark Kalluak Hall that brings the entire community together to enjoy the music of Nunavut.
Ph: (867) 857-2880/2841

Arviat has some very talented carvers and seamstresses.

The local carving stone is a metamorphic rock that geologists say is harder than steel!

Carvings made of this uncompromising material are stylistically unique to Arviat artists, often depicting themes of family, maternity and humanity. Be sure to visit the Kiluk store, which features a beautiful line of handmade sealskin products, including mitts and jackets that are much sought after.

Arvia’juaq is an island — Sentry Island — that was the traditional summer camp of the ancient Paallirmiut people who hunted the abundant marine wildlife resources to be found here. The island contains many ritual and spiritual sites.

Qikiqtaarjuk is a narrow point of land projecting into Hudson Bay from the mainland immediately adjacent to the island of Arvia’juaq. Qikiqtaarjuk contains tent rings, food cache sites, kayak stands and graves from the summer occupancy of generations of Paallirmiut.

Tourism Office
Run by the Hamlet of Arviat, this facility provides advice to visitors for activities such as dog sledding and snowmobile trips to see polar bears and beluga whales, to go fishing for arctic char and lake trout, or to hunt seals and caribou.
Ph: (867) 857-2921
Email: info@visitarviat.ca (or) arviat.tourism@gmail.com