The community of Cambridge Bay is located on the southeast coast of Victoria Island at the western end of Queen Maud Gulf where it narrows into Dease Strait.

In Inuinnaqtun it is called ‘Iqaluktuuttiaq’ because it is a ‘good fishing place.’

Cambridge Bay is the centre of government for Kitikmeot, the administrative and transportation hub for this region of Nunavut. It is the largest stop for passenger and research vessels traversing the Northwest Passage. The hamlet is located close to the Ekalluk River, which is famous for giant char. The Ekalluktogmiut people come from there.

The short section of the river that flows from Ferguson Lake to Wellington Bay is called ‘Iqaluktuuq’ in Inuinnaqtun, meaning ‘place of big fish.’

Its people are the Iqaluktuurmiut. This ancestral region of Nunavut has been inhabited for 4,000 years. It is rich in archaeological history and blessed with abundant fish, seals, geese, muskoxen and caribou.

Cambridge Bay enjoys constant 24-hour sunshine from May 20 to July 23. The sparse rainfall usually occurs in July and August when temperatures range from 5°C to 25°C. Snowfall is greatest in October and November. December has no daylight, only starlight, moonlight and the Northern Lights. Winter temperatures average between -25°C and -35°C, but can sometimes feel like -60°C with the wind chill.

Archaeological sites found all over this enormous island prove that indigenous peoples have been living in this part of the Canadian Arctic Archipelago continuously for the last four thousand years.

The Inuit people of Cambridge Bay, from the eastern and southern parts of Victoria Island, speak Inuinnaqtun — a different language from Inuktitut — because they are Copper Inuit people, descendants of the ancient Thule with their own distinct and unique traditions.

There are 21 subgroups of Copper Inuit and seven come from here. 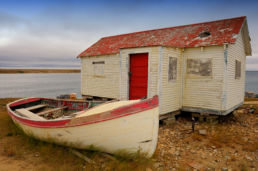 The Copper Inuit were so named because they made arrowheads, spearheads, ulu blades, chisels, harpoons and knives from copper that was traded amongst Inuit in exchange for soapstone pots and other valuables. They were hunter-gatherer nomads who came to the Cambridge Bay area because of its abundant wildlife resources.

The Norwegian explorer Roald Amundsen visited the Cambridge Bay area in his ship the Gjøa in 1905 when he discovered the Northwest Passage.

He arrived in Alaska in 1906. In 1918 he traversed the same route back from west to east in his new ship called the Maud. The Hudson Bay Company purchased this vessel as a fur trading supply ship, arriving in Cambridge Bay in 1921. The Maud was used for years before it sank into the harbour. Its exposed hull has been a Cambridge Bay landmark for 80 years. Norway is retrieving it now.

In 1947 a long-range navigational LORAN tower was constructed in Cambridge Bay. The construction project involved hiring many Inuit workers who later remained in the area. In 1954 a Catholic church was built using seal oil and sand as mortar. A Distant Early Warning military base was constructed here that same year. The DEW site revised its mission in 1989. It remains operative today as part of the joint United States and Canadian North Warning System.

Outdoor activities such as hiking, hunting, fishing, dog sledding, cross-country skiing and snowmobile riding are all very popular things to do in Cambridge Bay.

Fly-fishing for great big arctic char in nearby Ekalluk River and camping in historic Ovayok Territorial Park are rewarding summertime activities for the whole family.

Visiting the ancient archaeological sites of the Pre-Dorset, Dorset and Thule people, seeing how they lived and the panoramas they chose as home is truly awe-inspiring.

Wildlife abounds in this area. You will see caribou, muskoxen and seals. In July and August when the tundra is brilliant with wildflowers you can watch many birds, including jaegers, ducks, geese and swans. The community hosts the ‘Omingmak Frolics’ each May, which include seal hunting and ice carving competitions, fishing contests, talent shows, children’s games, dog sledding and snowmobiling races.

When staying here for an extended ecotourism adventure, or even just a brief visit from an arctic cruise ship traversing the Northwest Passage, be sure to tour the town, enjoy its hospitality and meet its fine artists.

Ovayok Territorial Park
This park is located 15 kilometres (9 miles) east of Cambridge Bay. The central feature of this special place is the distinctive mountain called Ovayok (Mount Pelly) that stands out from the landscape, rising 200 metres (656 feet) in height. For generations, Ovayok has been an important landmark and source of legend for the Inuit people and their Thule ancestors. There are five trails, totalling 20 kilometres (12 miles) of pristine arctic wilderness to explore, with designated camping areas and informative signage at important historical sites. The parkland is home to magnificent herds of muskoxen and its lakes teem with fish and waterfowl.

Queen Maud Migratory Bird Sanctuary
This migratory bird sanctuary is Canada’s largest federally protected nature preserve. It is home to one of the greatest concentrations of nesting geese on Earth. The landscape has countless shallow lakes and huge expanses of arctic lowland.