Also known as ‘Kinngait’ in Inuktitut, this ancient artistic community is a main stop for arctic cruise ships.

Inhabited by native peoples for three thousand years, Cape Dorset is situated on Dorset Island, adjacent to Foxe Peninsula at the southwestern tip of Baffin Island.

It is world-renowned for the quality of the artwork produced by its visual artists. Blessed with breathtaking arctic landscapes and an amazing abundance of inspiring arctic wildlife, Dorset Island and nearby Mallikjuaq Territorial Park are great places to view, draw and photograph migratory caribou, seabirds, whales, seals and walruses.

‘Kinngait’ is a popular destination for naturalists and art lovers who come here each year to experience the Inuit culture, to enjoy the treasures of the place and chat with the local artists.

Cape Dorset enjoys long sunny days from May through August with temperatures around 10°C on average, peaking at 20°C occasionally.

Fall weather is variable, usually around 5°C, mostly sunny, but sometimes foggy with heavy rains. The snow begins to accumulate in November. The coldest months are January, February and March when the temperature can drop to –40°C. The snow normally starts to melt in April.

Cape Dorset is the place where several archaeological sites of the ancient Dorset people (called ‘Tuniit’ or ‘Sivullirmiut’ in Inuktitut) were discovered that date back to 1000 BC. The more advanced Thule ancestors of the Inuit people eventually displaced them.

Scholars believe that the Dorset Culture people were perhaps the first North Americans ever encountered by Europeans who visited Baffin Island sometime before 1000 AD.

The Vikings called them ‘Skræling.’ Like the ancient Norse seafaring people of Greenland, the Dorset people became extinct by 1500 AD. However, mystical traces of them still remain here today.

Cape Dorset was named so by the British explorer Luke Foxe, after his sponsor Edward Sackville, the Earl of Dorset, in 1631. Before it was ever called Cape Dorset, the local Inuit people had always known this unique location as ‘Sikusiilaq’ in Inuktitut, referring to the area of seawater nearby that remains ice-free all winter. 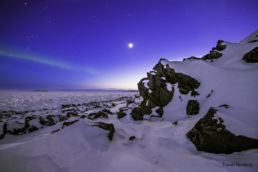 In 1947, an HBC supply ship called the RMS Nascopie ran aground off the shores of Dorset Island. Before it sank completely, the resourceful local Inuit people salvaged its supplies and retrieved wood from the ship to construct their homes.

At some point during the 1940s, the great Inuit photographer Peter Pitseolak acquired his first camera here from a Catholic missionary.

Cape Dorset has since become a world-famous centre for Inuit drawing, printmaking and carving.

In 1957, the Canadian artist, author and filmmaker James Archibald Houston (nicknamed ‘Saumik’ in Inuktitut, ‘the left-handed one’) established a graphic arts workshop here. Its print program was modelled after Japanese ‘Ukiyo-e’ (浮世絵 —’pictures of the floating world’) workshops. This art studio experimented with etching, engraving, lithography and silkscreen printmaking techniques.

Dorset Island and nearby Mallikjuaq Island waters and fertile terrain support many forms of arctic wildlife, including herds of caribou and walrus, pods of seals and beluga whales, occasionally a migrating bowhead whale passing by and sometimes a wandering polar bear or two.

In July, when wildflowers dapple the tundra valleys with vivid colours, when seabirds return for their nesting season, the local people will travel to hunting camps situated along the nearby shorelines, as they have done for centuries.

The well-trodden trails of Dorset Island and Mallikjuaq Island will take you to these special wildlife-viewing sites. Visitors enjoy trekking through the rolling hills to secluded waterfalls and crystalline lakes, pausing sometimes in ancient coastal places to sit in the bright sunshine and watch ice floes slowly drifting by.

After hiking, boating, skiing, snowmobiling or dog sledding, a visit to ‘Kinngait’ would not be complete without also experiencing its potent visual arts scene!

Cape Dorset is world-famous for its great artworks.

It has justifiably been called the most artistic community in Canada, with some 22% of its labour force employed in the visual arts.

Printmaking, drawing and carving are the primary economic activities here. Founded in 1959, the West Baffin Eskimo Co-operative is the best venue to view these beautiful works and meet with the famed artists themselves. Kinngait Studios, which house the co-op’s graphic arts program, produce a highly acclaimed print collection each year. Cape Dorset is fondly known locally as the true ‘Capital of Inuit Art.’

Mallikjuaq Territorial Park
Mallikjuaq means ‘big wave’ in Inuktitut, an appropriate name for an island where rounded rock hills and low tundra valleys resemble giant rolling waves. While magical Mallikjuaq Territorial Park gets its name from its gentle topography, its mystical spirit comes from its eternal wildlife and ancient human history. Located a mere forty-five minute walk from Cape Dorset, here in this park you will find a host of ancient Dorset archaeological sites, with stone structures dating back three millennia.

It is a special place of great solace and natural beauty.