Kugaaruk is located on the southeastern shore of Pelly Bay off the Gulf of Boothia on the western side of the Simpson Peninsula.

‘Kugaaruk’ means ‘little stream’ in Inuktitut, the traditional name of the small brook that flows through the village.

This place is also sometimes called ‘Arviligjuaq’ in Inuktitut, which means ‘place of many bowhead whales’ because it is situated near bowhead habitat.

Formerly known as Pelly Bay, the community changed its name to Kugaaruk in 1999. Home to some famous Inuit artists, it’s a great destination for sea kayaking and whale watching adventures.

Kugaaruk enjoys constant 24-hour sunshine from May 21 to July 22.

The native people are Arviligjuaqmiut (‘people of the place of many bowhead whales’). They are Netsilik Inuit descendants of the ancient Thule people and they have lived in the region around Kugaaruk for over a thousand years.

Most local Netsilingmiut continued to live a nomadic lifestyle until the 20th century.

They are one of the last indigenous northern peoples to have any contact with Europeans.

The first Christian missionary to reach this area, Father Pierre Henri, arrived here in 1935. The Catholic mission was established in 1937. With Father Franz Van de Velde, Father Henri built a small chapel out of stones in 1941. They soon learned that stone wasn’t a very good insulator in this harsh climate, so they adopted Inuit ways, living in igloos and wearing traditional Inuit clothing during the cold months. Inuit people would meet here for Christmas celebrations then separate again to pursue their nomadic lives. Kugaaruk is now restoring the old stone church as an important historic site. 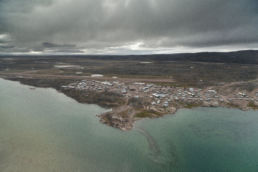 In 1955, during the Cold War, a Distant Early Warning (DEW) site was constructed at Pelly Bay that greatly increased contact with outsiders. The Government of Canada installed 32 prefabricated houses here in 1968 and salaried employment in the settlement began to replace the nomadic lifestyle of the local Inuit people.

While the transition to modern values has been rapid, hunting and fishing are still vitally important subsistence activities for most of the families living here. Cable television and Internet access began in 1998. The hamlet changed its name from Pelly Bay to Kugaaruk on December 3, 1999. The few remaining Elders of this community lived most of their lives out on the land in the traditional Inuit way, but nowadays with constant exposure to global culture, most local Inuit kids have learned to speak English first and Inuktitut second.

Venturing out onto the land will take you to some historic campsites for hunting and fishing with breathtaking views of the landscape. April and May are the best months to enjoy the snow and the sea ice in bright sunny conditions. July through September is the best time of year for boating and exploring the area by ATV.

Kugaaruk is home to some famous Inuit artists like Emily Illuitok, who worked mostly in walrus ivory, and Nick Sikkuark, who worked in whalebone and caribou antler. The distinctive carvings of Kugaaruk artists are often characterized by droll, macabre wit. Local arts and crafts can be found at the Koomiut Co-op store.

There are no national or territorial parks located near Kugaaruk. The best local camping sites for wildlife viewing, hunting and fishing have been used for many centuries by the Arviligjuarmiut