This hospitable hamlet is located 50 kilometres (31 miles) south of the Arctic Circle on the broad reaches of an ancient beach in Pangnirtung Fiord at the north end of Cumberland Sound. Outdoor arctic enthusiasts identify it as the southern gateway community to the famous Auyuittuq National Park.

Also known as ‘Pangniqtuuq’ and fondly called ‘Pang’ for short, this artistic community, famous for the quality of its woven tapestries and lithographic prints, is situated on a beautiful fiord in scenic mountainous terrain that is very popular with hikers, climbers and skiers.
Population

‘Pang’ is located at the base of snowcapped mountains that rise majestically beside the Pangnirtung Fiord to shelter the charming hamlet.

In the warm months of June through August, temperatures range from 5°C to 20°C. In the wintertime, extreme temperatures sometimes drop to -40°C. There is limited sunlight in the middle of winter and it can get very windy. With the wind-chill factor, it can feel like -60°C.

Summers are pleasant in Pangnirtung with 24 hours of sunshine from June 8 to July 4.

Inuit contact with Europeans and Americans greatly increased in the 19th century. A Scottish whaling station was established on nearby Kekerten Island in 1840 and the entire Cumberland Sound area was soon visited by whaling vessels.

In 1921, the Hudson Bay Company founded a trading post in Pangnirtung and two years later the Royal Canadian Mounted Police (RCMP) erected a permanent office here. In 1956, the first federal government teacher was appointed for the local school and in 1962, the first administrative offices of Pangnirtung were established.

Numerous artists from Pangnirtung have achieved success with the marketing of their Inuit art. They transformed traditional drawing skills to produce beautiful lithographs and prints, allowing for reproduction and a wider distribution of these artworks. In 1970, the Government of Canada introduced a weaving studio.

Indigenous people have inhabited the land near Pangnirtung for 4,000 years.

Today, many Inuit artists from ‘Pang’ are producing vivid tapestries and other fine works that reach an appreciative international market. 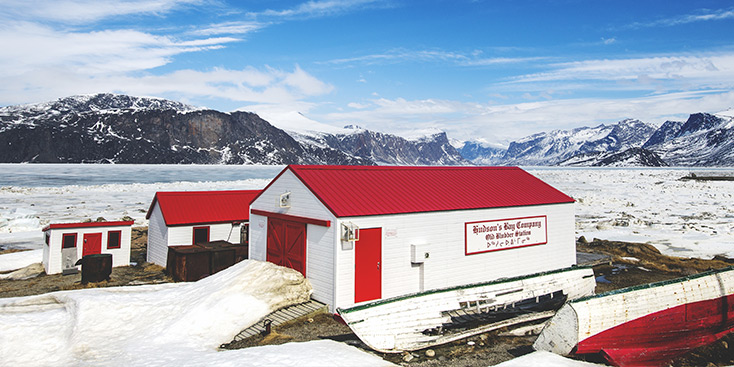 ‘Pang’ has great parks: Pisuktinu Tunngavik Territorial Park, situated at the head of Cumberland Sound, and Kekerten Territorial Park on nearby Kekerten Island, plus it is conveniently close to the southern boundary of the great Auyuittuq National Park, offering a full range of outdoor activities such as hiking, climbing and camping in the summertime and cross-country skiing in the winter.

The most popular outdoor activities in Pangnirtung include hunting, fishing and snowmobile riding, but visitors can also enjoy dog sledding and igloo camping. In early April each year the community stages a day of feasting and music to celebrate becoming a hamlet. In mid-to-late May it holds a very popular annual fishing derby.

There are many kinds of wild animals to be found thriving in the pristine lands and pure waters near Pangnirtung, such as polar bears, caribou, arctic hares, arctic foxes, arctic wolves, seals, narwhals, beluga and bowhead whales, arctic char and turbot, plus several species of birds including ptarmigan, ravens, gulls and a variety of migratory songbirds.

The towering mountains and glaciers of Auyuittuq are spectacular sites to visit, including Mount Thor with its amazing vertical cliff face, but equally stunning and vitally important since ancient times to nomadic Inuit hunter-gatherer families is the beautiful Pangnirtung Pass. 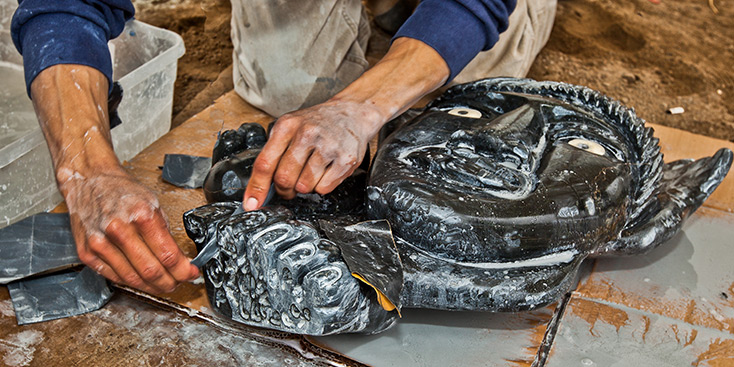 It is also famous for a unique style of crocheted winter hat called the ‘Pang Hat’ that is very popular all across Nunavut. One of the most enjoyed cultural attractions in ‘Pang’ is the Uqqurmiut Inuit Arts Centre, with its studios and shops.

Pangnirtung is renowned for its traditional Inuit arts and crafts, particularly the excellent quality of its woven tapestries and its lithographic prints.

‘Auyuittuq’ in Inuktitut means ‘land that never melts.’ Established in 1976, this national park protects 19,089 square kilometres of pristine, glacier-scoured arctic terrain. The Inuit people have used this beautiful land for thousands of years as a traditional travel corridor.

Piskutinu Tunngavik Territorial Park
The Pisuktinu Tunngavik Territorial Park campgrounds recently expanded to include tent platforms, picnic facilities, privies and a communal fire pit. It provides a great place to camp out when visiting Pangnirtung and touring the popular sites in and around the community such as the Uqqurmiut Arts Centre with its affiliated Weaving Shop, the old Hudson Bay Company Blubber Station and the Angmarlik Visitor Centre.

Kekerten Territorial Park
Located on Kekerten Island, about 50 kilometres (31 miles) south of Pangnirtung, this historical park area was established on grounds that were first used as a whaling station when Scottish whaler William Penny charted the island in 1840. Soon afterwards, the entire Cumberland Sound area became a major whaling destination for the British and the Americans.

Nowadays, a pleasant three-hour boat ride will take you from Pangnirtung to Kekerten Park where you can explore the historical remains of this bygone era, which are all described in detail with signage along an interpretive trail. Special features of the site include the foundations of storehouses built in 1857, large cast-iron pots once used for rendering whale oil, blubber-hauling pins and the surviving remnants of an antique whaling ship.

Offices of the Hamlet of Pangnirtung